Ossia Records was proud to present NEOLEKTRA at the main stage at the National Arts Festival in Grahamstown, 2017. We would like to officially thank the organisers of the festival for inviting and hosting NEOLEKTRA, the band had a blast. Shows were sold out, the audiences were receptive and warm with applause. We would also like to thank the reviewers for their kind and on-point reviews and interviews. Some snippets:

- "Attacking the strings with a series of spiccatos and vibratos among other modes of flight, she uses the instrument as both a weapon and as a means to rally those who can fight alongside her in a post-apocalyptic wasteland struck by violence and destruction. Six soldiers answer her call in a chorus of strings, synths and percussive beats. Together, they are a band of musical warriors: Neolektra" - Nareesha Patel, Cue Media, http://cuemedia.co.za/2017/07/04/neolektra-we-are-immortal/

- "expressions of sublime progress and being made by adventurous, courageous and immensly talented SA musicians" - Mike Lowe, The Critter, http://thecritter.co.za/neolektra-and-re-mixing-music-two-strands-of-one-thread/

- "This futuristic band of “immortals” may very well have come to haunt mortals with an impossible-to-forget sound – the sort which is remembered intrinsically. Neolektra invokes a nostalgic feeling from a future yet to be seen, something this world remembers vaguely off the shores of the memory banks" - Lebogang Tlou, TalkOfTheTown, http://talkofthetown.co.za/2017/07/08/neolektra-leave-audience-spellbound/ 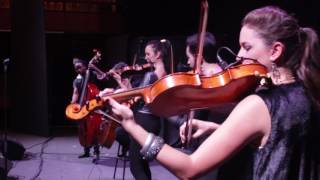